Exploration of the Sacred Wound – in Bill Plotkin’s book

In preparation for the second episode of my radio show this Thursday, January 15th, I would like to post an excerpt from Bill Plotkin’s book, Nature and the Human Soul. This excerpt addresses what Bill calls the “Sacred Wound,” a wound we apparently all carry in our psyche. This corroborates the notion of “Inner Child” (or inner child work), which may be more familiar to many. Whether “inner child,” or “sacred wound,” it appears that there is “work” for all of us to do.

Exploration of the Sacred Wound
In “The Wanderer in the Cocoon” chapter
Nature and the Human Soul
p. 262-263 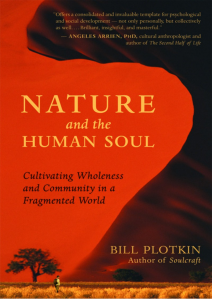 When the Wanderer has eliminated all substance addictions and other notable dependencies, and has made significant progress with the Oasis task of welcoming home her Loyal Soldier, she finds one branch of memory that is particularly and uniquely painful. This is an early psychological wound, a trauma so great she formed her primary survival strategies of childhood in reaction to it, so hurtful that much of her personal style and sensitivities have their roots there.

If she grew up in the worst sort of egocentric setting (in which family dysfunction is common), she might have been emotionally abused or neglected. Perhaps an alcoholic father blamed her for his own misery or acted as if she were his girlfriend, or an insecure and jealous mother saw her as a threat to her marriage. Maybe an older stepsister tormented her or a strict and demanding parent told her she would never measure up.

She need not come from a dysfunctional family, however, to have wounds. Her core wound may stem from birth trauma or a birth defect, or the death of her mother when she was three, or a pattern of innocent but shattering betrayals at the hands of her older brother. Maybe it was her father’s absence due to illness, or her guilt at surviving the car wreck that claimed her younger sister, or her own childhood bout with a potentially deadly fever.

Although personal histories often include injurious events such as these, the core wound rarely stems from a single traumatic incident. More often it consists of a pattern of hurtful events or a disturbing dynamic in one or more important relationships.

Even in the healthiest families, each person suffers from a core wound. From the perspective of the Cocoon, this is not an accident, nor is it unfortunate. Some say that the soul orchestrates the wounding to catalyze a special type of personal development not possible until the Cocoon, one that requires a trauma for its genesis.

By experientially exploring your core wound, you can render it sacred. Your wound holds a key to your destiny. By surrendering to the grief and frightful memories at the heart of the wound, no longer distancing yourself from what you uncover there, your psyche is torn open so that new questions can be asked about who you are at your roots. These fomenting questions facilitate the death of your old story and the birth of a larger story, a soul story, one revealed by the wounding itself. The goal in sacred wound work is not to patch up your small story, or to heal the adolescent ego, but to disidentify from both. The wound becomes sacred when you are ready to release your old story and become the vehicle through which your soul story can be lived into the world.

By courageously diving into your core wound, patiently allowing the suffering to do its work, neither indulging nor repressing the pain, you reach the bedrock of your psyche, where the most profound truths of this lifetime awaits. But you must avoid making sense of your pain too soon, finding relief too quickly, blaming someone for your anguish, or seeking revenge. Don’t cave in and seek refuge in self-blame, self-pity, or playing the role of the victim or martyr; or through denial, cynicism, abandoning your own dreams and values, or paranoid confidence in a never-ending series of further woundings. Allow the wound to do its work on you even if you descend into a pit of hopelessness. If you remain there long enough, you’ll be shorn of the personal patterns and attachments that must die so you can be reborn into a greater life. Sacred-wound work should not be attempted before the Cocoon stage.

Rumi says, “Wherever there is a ruin, there is hope for treasure—why do you not seek the treasure of God in the wasted heart?”

In the contemporary West, conscious investigation of the sacred wound, when attempted at all, most commonly takes place in those rare psychotherapies that journey deep into the psyche to encounter the demons and monsters of our greatest fears. These wounds can also be approached through exceptional forms of bodywork or though ceremonies that expose our grief and allow its full experience. In a soul-centered setting, the elders, who know we all carry sacred wounds, offer rituals and nature-based practices that help us uncover and assimilate the lessons and opportunities, the treasures, hidden in our wounds. In whatever way we go about it, a thorough acquaintance with our sacred wounds loosens our attachment to our former identity and becomes a vital component of the metamorphosis that occurs within the Cocoon.

Nurturing the Gift of Seeking is about a spiritual "destination," a journey within, a new beginning, that eventually takes us where we are meant to arrive. What matters is, first and foremost, our seeking spirit. Happy journey, dear fellow Sisters and Brothers!
View all posts by new desert →
This entry was posted in Authors, Rado show and tagged Bill Plotkin, Cocoon, healing, inner child, psyche, sacred wound, The Wanderer. Bookmark the permalink.