A Call for Reconciliation, inner and outer

A Call for Reconciliation, inner and outer

As we spent a week in the beautiful and vibrant Big island of Hawai’i, I felt a fresh surge of inspiration and creativity spewing forth—in Madame Pele’s volcano fashion—to launch me on a new, breathtaking path; a path I honor and attempt to follow with utmost gratitude.

This fresh wave made its way ashore last Sunday, October 23rd. I felt compelled, early in the morning, to work on and write about a gathering I called for the last two weeks of June 2017 in Les Labadous, a gorgeous, soothing place located in southern France. The words flowed and a few paragraphs were born, out of a desire to co-create a healing circle, not only for our seeking selves but, most importantly, for the land and for humanity.

Since my return from France early September, I am noticing a gentle thread being woven, constantly and quietly, into my life. In a fashion similar to the smoke escaping from Madame Pele’s lava tubes, I cannot see or sense much magma boiling underneath; and can only feel the heat when divine inspiration reaches the surface of my consciousness. Yet, since visiting Les Labadous early last month, I am gradually being made aware of what is building, and what ought to emerge at some point, once all the pieces will have been assembled.

What erupted Sunday morning, beyond the urge to write, is a by-line for the title of the seminar. “Walking the Sacredness of Our Lives” had been etched at Les Labadous early September, and this Sunday was added a desire to nurture reconciliation, at various levels; hence the addition, “A Call for Reconciliation, inner and outer.”

On that same mystical Sunday, our family went to visit a sacred Hawaiian site, Puuhonua O’Honaunau. Although the site hasn’t been used for ceremonies for almost two centuries, it maintains its captivating character and its sense of wonder. There is a path to follow, in and out, and remnants of huts and altars are still visible.

I used the picture below for our October 27 gathering A call for reconciliation, inner and outer and two people contributed some beautiful comments concerning the site. 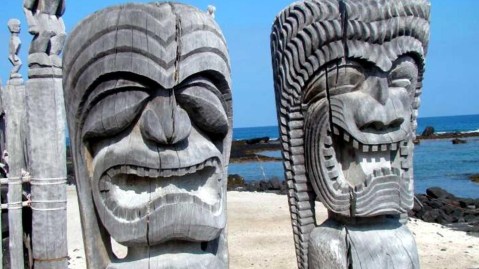 These comments echo what I sensed that Sunday morning, and what I’ve been teaching all along: the need to go within—and do the spiritual work we are called to do—precedes any attempt at reconciling in the outer world. It seems to me that an eternal truth is being exposed yet one more time.

The ‘iki’ are fearsome looking. Not only to protect us from outsiders, but also from ourselves. The secret of symbols is its dual nature; to teach us about ourselves, inside and outside. We live in a world where we are drawn like a magnet to the outside and, maybe, one of our greatest reconciliations is to admire, love, protect, respect, and acknowledge our inner selves. A self that longs to be loved and to make us feel how much we are loved by It.

Puuhonua O’Honaunau on Hawaii Island is a very sacred place. I was just there. I feel you are correct in being taught to go within. This place was a place to go to in the event you had made a mistake and were to be executed. In those times, when you broke the law, that was it; punishment was death. No trial; the person who saw you breaking the law would have to do it. If you could make it here to this place, and it was not easy to do so. You could not be touched by anyone. After a day or two, you would be allowed to see the priest and would be forgiven of all your wrongdoing. You would be taught to go within to forgive yourself and return to your city and be able to contribute as a citizen again; the difference being you would now see the Light in yourself. This is what I got as I walked through this site. Some of the story is not told correctly by the caretakers (the national parks guards) of this site. I was very honored to receive what I did.

What is left out of this surge & search is a question, whose answer may not come forth till the month of June, as I (and we) prepare inwardly: what do I—and what do we—need to reconcile?

Perhaps another surge of fresh inspiration will bring me closer to my own truth? 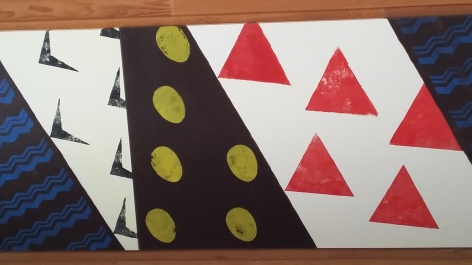 Gods and Goddesses of Hawai’i

..Namakaokahai – sea goddess, symbolized by the blue waves on black.

..Kamohoali’i – shark god, takes the form of a shark tooth.

Nurturing the Gift of Seeking is about a spiritual "destination," a journey within, a new beginning, that eventually takes us where we are meant to arrive. What matters is, first and foremost, our seeking spirit. Happy journey, dear fellow Sisters and Brothers!
View all posts by new desert →
This entry was posted in My Personal Path and tagged courage, life light love, listening, Mission. Bookmark the permalink.