The road ahead of us

What is, and where is the road ahead of us, dear Ones?

It feels like this road is not clearly delineated.

And, honestly, why would it be?

What matters is that it does exist, somewhere in the not so distant future. 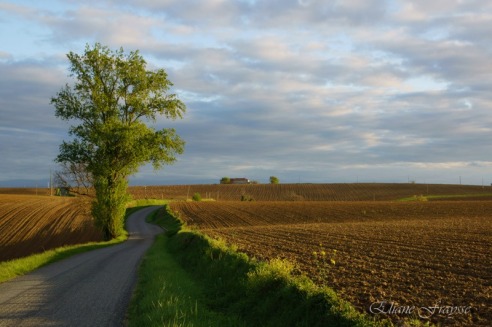 Interestingly, the feeling of the week is flatness.

Not flatness of the landscape, or the road, but flatness in terms of the absence or scarcity of signs, insights and signals.

And that is strange, after so much surface activity in the past few weeks.

Come to think of the road and travel, I came across a beautiful story yesterday.

That of Aegidus, or Giles, a Greek sage and healer, living in southern France in the early part of the 8th century. He selected two wooden doors during his visit to the papal city—”two doors engraved with the likeness of Saint Peter.” Upon his request, the pope happily donated these doors, so that they could adorn the facade of Aegidus’ abbey in the south of France. Yet he didn’t know how to bring them back and therefore had them dropped into the river that flows through Rome, the Tiber. And, somehow, they found their way Home.

Just like we are finding our way Home, dear Ones…

…despite any clear sight of the road ahead.

Here is the full story, for your perusing.

Then on a certain day, when he was earnestly in prayer in St Peter’s monastery, he saw therein two doors that were made of cypress wood and were engraved with the apostle’s likeness. These he asked for also from the pope for his monastery’s adornment and for a pledge of true love and the pope assented to this happily. Then the man of God did not know how he would bring them home to his monastery but trusted their journey to God’s direction, and commanded them to be brought to the Tiber and thrown in there, and it was so done. And when the Romans saw this, it seemed to them a great wonder that the precious treasures which God’s man had wanted such be so carelessly lost. But the pope understood and knew all about this, that Giles did it through the will of the lord.

Also after this, Giles earnestly took his leave of the pope because he had to go home to his monastery since he had understood all that pleasing to his lord. They commended their lives and their souls to almighty God and gave each other a kiss of peace and so parted with true love.

Then God’s darling Giles went out of Rome, home to his monastery, and when he came to the town of… he rested there for three days because he was very weary after such a great journey. And he healed there a cripple who was all crooked after many years. He left that town with a happy mind and as soon as he came home to his monastery, then men made known to

him that there had arrived at the shore two doors wonderfully and beautifully engraved, that were without a ship and without any man’s means of getting them there. When the blessed Giles heard this, he became very happy and gave great thanks to his lord that he had sent there such precious treasures unharmed, though they were often driven into the sea and often passed over many sand beds and suffered many difficulties because of the many havens, and yet unharmed they arrived through God’s mercy.

Nurturing the Gift of Seeking is about a spiritual "destination," a journey within, a new beginning, that eventually takes us where we are meant to arrive. What matters is, first and foremost, our seeking spirit. Happy journey, dear fellow Sisters and Brothers!
View all posts by new desert →
This entry was posted in My Personal Path, Quotes on consciousness and tagged life light love, saint gilles. Bookmark the permalink.