A certain amount of readiness

By readiness, dear Ones, I am implying that humanity has shown some encouraging signs of ‘global consciousness rising’ in the past few days. People coming together and fighting for causes that may have been foreign to them only a few years ago.

In that regard, there is absolutely no doubt that the first four months of 2020 have had a beneficial effect—an effect we could not fathom in the midst of our health crisis.

I am referring more specifically to what happened this past weekend, more or less all over the world, in reaction to the senseless death of George Floyd. 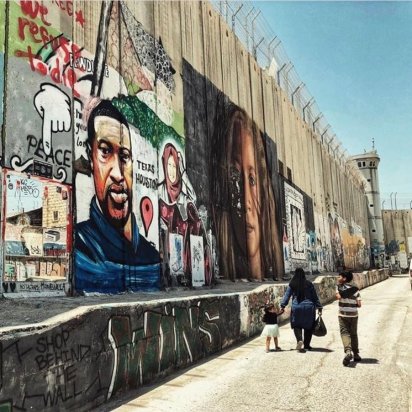 His effigy now appears in Bethlehem on the wall that separates Israel and Palestine—a beautiful mural it is. That is the photo I chose to illustrate this week’s communion.

What does George’s life and death have to do with separation and divisiveness? And how will it help to ‘close the gap’? These are important questions to explore.

In the city of Bristol, England, protestors toppled the statue of slave merchant Edward Colston and threw it into the Avon river. Edward Colston (1637-1721) sold over 100,000 slaves to north America and the Caribbean between 1672 and 1689. The statue was erected in 1895, because of Colston’s generosity toward the city and yet the local officials could not comprehend why its presence was an insult to humanity.

Wake up folks. This is 21st century and people are standing for their humanness.

Something similar happened in Belgium over the weekend. People are petitioning the government of Brussels to remove all statues of Leopold II. He was king of the Belgians between 1865 and 1909 and is said to have ordered the torture of over 10 million of Congolese people in Belgium’s former colony in central Africa.

The past is coming back, dear Ones, fast and furious, and people are waking up to the ignominies that have been committed over the centuries.

This is a great sign of hope, a great of readiness.

Global consciousness is rising and it will not halt.

Yet, I personally don’t know where it will stop, if anywhere, and what it will accomplish.

Liberation of humanity is one possible outcome, I think.

A George Floyd mural in Bethlehem on Israel’s separation wall.

Nurturing the Gift of Seeking is about a spiritual "destination," a journey within, a new beginning, that eventually takes us where we are meant to arrive. Some call it Home, yet I am not sure what Home means, and where it is. Enjoy the journey, dear Ones! On this journey, what matters, first and foremost, is our seeking spirit. And the seed of perseverance--or faith, if you will. Happy journey, dear fellow Sisters and Brothers!
View all posts by new desert →
This entry was posted in My Personal Path, Quotes on consciousness and tagged life light love, separation. Bookmark the permalink.