I, Raphael, or Israfil, have guided and protected Jewish, Christian, and Islamic pilgrims on holy journeys. I am recognized by all three traditions as a powerful healer, and today, I speak to you of healing. As one spiritual Age closes and another dawns, much healing is required to step safely and prudently from one into the other. The way of the world has always been etched in strife and suffering. As the Piscean Age dissolves and the Aquarian Age dawns, much collective healing is sought by all who are awake enough to make the request.

What wounds are you, together, trying to heal? Indeed, my friends, they are legion. Most could be categorized as wounds of misapplied power, domination, and the manipulative superimposition of one (person, culture, or nation) over another. These wounds are much more difficult to heal than are the devastations arising from natural disasters such as storms, earthquakes, volcanic activity, etc. The activities of the elemental forces are in no way “personal,” and thus can be encountered with relative neutrality, even though their affects may be great.

However, human acts of inhumanity, generally wrought upon those possessing less physical or monetary power, constitute quite another matter. This type of wounding cuts to the very soul, making the needed healing a multi-lifetime endeavor. What’s more, it deeply scars the collective integrity of the race or culture so wounded. In the end, those so wounded become the greatest teachers for humanity, for they have borne a great price for the redemption of the collective consciousness.

Just as I stirred the waters in the pool of Bethesda to heal the ill and infirm lowered into that pool, so I must once again stir the waters of afflicted mind. You are all being called to help me with this great and daunting task. To do so, however, you must first cleanse your minds of the negative imprints of the Taurian, Arian, and Piscean Ages. Approximately 5,000 years ago, as legend holds, humans began constructing a tower, one that they intended to take them into heaven. Of course, they did not understand that “heaven” had to be found inside themselves.

Since their goal of ascending into the realms of the Divine was misinformed and misplaced, they created much havoc. In the end, the story holds, the races were divided by language differences, and people, not understanding one another, began to fight and wage war. While this story may be a great oversimplification in many areas, those who consider themselves healers must recognize that perhaps the wounds of that Taurian Age remain unhealed even today. Truly, they render both the wounded and the wounders unfit for the Aquarian Age.

I speak to you of healing, since it is only through healing the past that the future can realize its promise. I speak to you of healing because you must actualize the healing. While your modern technology offers many graces and gifts, it cannot heal the traumas assimilated into the collective consciousness from prior Ages. These must be released, utterly, from the field of the collective psyche. Yet, progression of Ages notwithstanding, the collective need for a new dimension in healing looms large as the Aquarian Age opens.

I call upon all who have adequate maturity to create, and then enter, a new paradigm for healing the collective wounds of planetary experiencing. Remember, real power is found not in the inflicting of wounds, but in their healing and transformation. As humanity negotiates this New Age, may wisdom and clarity be the guiding light and the force for abundant healing. 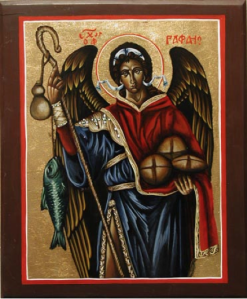 Nurturing the Gift of Seeking is about a spiritual "destination," a journey within, a new beginning, that eventually takes us where we are meant to arrive. What matters is, first and foremost, our seeking spirit. Happy journey, dear fellow Sisters and Brothers!
View all posts by new desert →
This entry was posted in Authors, Quotes on consciousness and tagged Archangel Raphael, healing, sacred wound, Wound wounds. Bookmark the permalink.