A most meaningful commemoration

I returned to Mount Vernon today, where the estate of George Washington, first president of the United States between 1789 and 1797, is located. I visited for the first time last Friday and wanted to get another feel for it, knowing I had not spent much time in the Education Center.

And so I hopped onto the Yellow Line metro till its terminus and connected with the number 101 bus, Fort Hunt line.

I (re)watched the short intro movie, which is followed by a much longer film highlighting some of George Washington’s defining moments: his first meeting with Ms. Custis, the widow who would become his wife, a skirmish during the French Indian war, and his infamous crossing of the Delaware river on Christmas day 1776. His conviction, bravery and military genius shone through the few words he uttered to his ‘worn out’ generals during this cold winter of 1776. “This is our country. It belongs to us.”

I then set out to explore the wharf area, along the Potomac river, accompanied that I was by a brilliant pink-surrounded sun and some two-legged companions: a flock of geese that was resting and bathing in the sun, just as I was.

The hour of 12 noon was approaching and I decided to go up a few steps to the vault where George and Martha’s bodies lay since 1831. There is a wreath laying ceremony every day and I didn’t want to miss it. Such a profound way to pay homage to people who drastically changed and shaped the face of an emerging nation.

I exchanged a few words with Tricia, the employee of the Ladies of Mount Vernon Association, who, I assumed, was there to conduct the wreath laying ceremony.

I inquired about Martha’s status as a widow, her children from her marriage with Mr. Custis (she was 17 when she married him), and the cause of the passing of both George and Martha. While the definite cause of Martha’s 1802 death couldn’t be identified, three were explored; typhus was one of them.

As to George, he died of epiglottitis. Never heard of it? Don’t worry, I hadn’t either until 11:55 this morning. According to the Mayo Clinic, “Epiglottitis is a potentially life-threatening condition that occurs when the epiglottis — a small cartilage “lid” that covers our windpipe — swells, blocking the flow of air into our lungs.”

And that’s what happened to George Washington on a fateful day in December of 1799. He died on the 14th of that month and missed the 19th century by a mere 18 days. He had four doctors at his bedside, one of them who had performed an opening of the trachea, which could potentially save George. Unfortunately, his patient had died and no one thought it was worth taking the risk with the first president of this new country.

I was the only one attending the wreath laying ritual. At 12 noon, to my amazement, Tricia asked me to lay the wreath. The ceremony also entailed the recitation of the Pledge of Allegiance, and the reading of a prayer written by Washington himself.

Tricia and I recited the pledge while facing the flag, she then opened the gate to the vault and let me put the wreath right between the two tombs, respecting symmetry and balance as much as I could. I then came out and recited aloud the following words.

“I now make it my earnest prayer that God would have the United States in his holy protection, that he would incline the hearts of the Citizens to cultivate a spirit of subordination and obedience to Government, to entertain a brotherly affection and love for one another, for their fellow citizens of the United States at large, and particularly for their brethren who have served in the Field and, finally, that he would most graciously be pleased to dispose us all, to do Justice, to love mercy, and to demean ourselves with that Charity, humility and pacific temper of mind, which were the Characteristics of the Devine Author of our blessed Religion, and without an humble imitation of whose example in these things, we can never hope to be a happy Nation.” Amen

This prayer was addressed by George Washington to the governors of the new nation on July 8, 1783. He was still the commander in chief of the continental army at the time and his headquarters was based in Newburgh, New York. 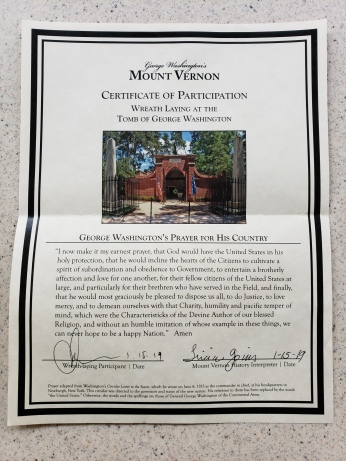 I also took the opportunity to take a picture of the marble plaque above the two tombs. I could not do that the Friday prior, blocked that the view was by the gate of the vault.

The plaque covers a citation from the apostle John.

25 “I am the resurrection and the life,” said the Lord. “He who believes in Me, though he may die, he shall live. 26 And whoever lives and believes in Me shall never die.”

These may seem like no more than meaningful and appropriate words blessing the realm where George and Martha lay for eternity. Yet, to me, they take on a more special meaning, knowing January 17th is around the corner. The image of spiritual Death has been ringing in lately, through the Tarot and other concrete signs, and January 17th marks the day when Yeshua raised my father Lazarus from the dead. 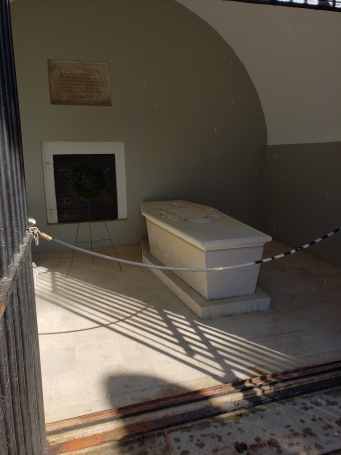 How more meaningful can this time be? And how more synchronistic this visit to George Washington’s sacred land could possibly be?

To make matters even more significant in my personal history, January 15th, 2019—which is today—marks the very beginning of my 30th continuous year living on the soil of the United States.

I could not wish for a more beautiful gift to commemorate both the life of an American history craftsman and the anniversary of my own commitment and dedication to this land.

Nurturing the Gift of Seeking is about a spiritual "destination," a journey within, a new beginning, that eventually takes us where we are meant to arrive. Some call it Home, yet I am not sure what Home means. On this journey, what matters, first and foremost, is our seeking spirit. And the seed of perseverance. Happy journey, dear fellow Sisters and Brothers!
View all posts by new desert →
This entry was posted in My Personal Path and tagged Commitment, Destiny, George Washington, Love, Martha Washington, Mount Vernon. Bookmark the permalink.

3 Responses to A most meaningful commemoration